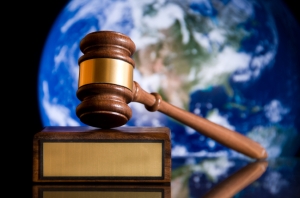 Each member state that enters to the international environmental agreement must acknowledge the provisions of dispute settlement. The United Nations (“UN”) system provides various options on dispute settlement such as but not limited to negotiation, enquiry, mediation, conciliation, arbitration, and judicial settlement (refer to Article 33 (1) of UN Charter).

Negotiation consists of a proposal made by one or the other parties to a dispute and the reaction of the other party, including counterproposals, in order to reach agreement. The independent body must establish the facts of a determined case on process of enquiry. Mediation consists in brining the disputing parties together and submitting to them concrete proposals for the settlement of the dispute. [1]

Judicial settlement generally means a decision by the International Court of Justice (ICJ), the main judicial organ of the UN (Article 92 UN Charter). Decisions of the ICJ are always obligatory and must be executed. Although the decisions have no binding force, its scientific and moral authority are general considered to express customary international law.[2] Moreover, the UN Charter also gives parties the freedom to choose the dispute settlement by virtue of agreements in existence or which may be concluded in the future (Article 95 UN Charter).

The followings are the UN institutions that are available under UN System:

Any member of the UN may bring any dispute or situation of the nature, which leads to international friction or could give rise to a dispute that is likely to endanger the maintenance of international peace and security, to the attention of the General Assembly (refer to Article 35 of Article 34 UN Charter). The resolutions of the General assembly have no legal binding but they serve as a building block of soft law related to the environment.

As mentioned before, the ICJ is the principal judicial organ of United Nations[3] and may give an advisory opinion on legal questions.[4] The ICJ has ruled on issues related to the environment in different realms. In 1996, it made a ruling on nuclear weapons[5] and also issued judgment on the management of transnational natural resources in the 1997 Danube Dam Case. While the decision of the ICJ has no binding force the judgment is final and can not be appealed. The role of ICJ in environmental issues has grown over the years and is recognized as customary international law.

The Secretary General has role as a depository of treaties (refer to Article 102). It also has the right to bring to the attention of the Security of Council any matter which in its opinion may threaten the maintenance of international peace and security (refer to Art. 99 UN Charter).

The Secretary General may render a legal opinion. This was done in 1993 at the Conference of the Parties (“COP”) for United Nations Framework Convention on Climate Change (UNFCCC), where the Secretary General issued a legal opinion that stated that the UNFCCC has the legal capacity within the limits of its mandate, to enter into agreements and other arrangements with entities such as states, intergovernmental and non-governmental organizations and bodies, which also have to the authority to do so. The Global Environmental Facility (“GEF”) on the other hand which was established under World Bank, does not have the legal capacity to enter on its own into agreement. If the COP wishes to use the present GEF as an operating entity, it would have entered into an agreement or an arrangement with the World Bank as the parent organization.[6]

With regard to its role on environmental issues, the Secretary General can also act as a conciliator which was done in the Rainbow Warrior Affair case in July 1986.[7]

The World Bank has a significant role on environmental issues. It prepares the operational policies for development projects, including projects related to environmental and natural resources management. It also follows up on the decisions of the Independent Inspection Panel as well as conducts the national capacity building, including environmental legislation.[11]

The World Bank established the World Bank Panel Inspection in 1994 to respond to requests from citizens of Nepal who claimed that their rights and interests had been or were likely to be materially and adversely affected by the acts or omissions of the International Development Association during the design and appraisal of proposed IDA Project “Arun III”[12] (refer to Nepal: Arun III Proposed Hydroelectric Project and Restructuring of IDA Credit 2029-NEP case). Further the management response to the Inspection Panel’s investigation report was issued on August 2, 1995 that the Management supported the Inspection Panel’s report. [13]

The WTO system is conceivably the strongest inter-State judicial dispute settlement mechanism in existence, which seeks to be an effective guardian of the rules based system that underpins the WTO.[15] The WTO Understanding on Rules and Procedures Governing the Settlement Dispute (“DSU”) provides the basis dispute settlement under WTO such as establishment of a panel[16] and the appellate body[17].

Although this system is not without imperfections, it stands in sharp contrast to dispute settlement mechanisms in International Environmental Agreements, which tend not to be used. It is precisely because of the power of the WTO dispute settlement system, and its potential to impact directly on the economic interests of disputants, and thereby a country’s overall policy landscape, that the environmental community has particularly scrutinized developments in the WTO Dispute Settlement Body.[18]

The Dispute Settlement Body of WTO has a significant role on environmental issues by enforcing trade restrictions. For example, unsustainable fishing practices were discouraged after the WTO ruled in 1994 [19] that European countries could ban the import of shrimp and tuna that recklessly killed turtles and dolphins.[20]

The United Nations system provides a numbers of avenues for members to mediate conflicts related to the environment. As discussed, these legal avenues take many different forms and give the system an overall flexibility that allows for complex environmental issues to be resolved. The system also establishes customary law over time with the creation of UN resolutions and legal opinions. These resolutions are often the first step in establishing new environmental treaties. While most international law is hard to enforce, UN security resolutions and WTO rulings give these decisions teeth as they threaten of the use of military force or economic sanctions. However the moral and political authority of the UN serves as the foundation of international customary environmental law.

Peter H.SAND, The Role of International Organizations in the Evolution of Environmental Law, UNITAR, Geneva 1997.

Charter of the United Nations, http://www.un.org/en/documents/charter/intro.shtml.

[3] Charter of United Nations, Article 92 and Statute of International Court of Justice, Article 1.

[5] Legality of Nuclear Weapons-International Court of Justice, advisory opinions to WHO and UNGA, The Hague 1996 cited in Sand, 1997.

[6] Peter H.SAND, The Role of International Organizations in the Evolution of Environmental Law, UNITAR, Geneva 1997, p.68.

[7] Conciliation Pertaining to the Differences between France and New Zealand Arising from the Rainbow Warrior Affair, 1986 cited in Sand, 1997.

[8] Under Chapter Six of Charter of United Nations, ”Pacific Settlement of Dispute.”

[11] Peter H.SAND, The Role of International Organizations in the Evolution of Environmental Law, UNITAR, Geneva 1997, p.23