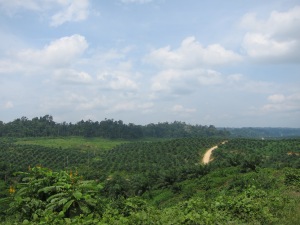 Palm oil is a major ingredient in consumer goods products both food and non-food products. It contributes to the economic development in Indonesia.  On the other hands, palm oil faces many challenges such as deforestation issue, social conflict, and GHG emissions.

The palm oil plantation expansion is taking pace on forested peat lands. Peat land has huge amount of carbon, so clearing peat lands by draining and burning them releases huge greenhouse gases. Greenpeace identified that some of the fires in Sumatra based on NASA hotspot data. Further, based on Greenpeace report that some palm oil companies appear to operate outside the law for years with little sanction. Greenpeace found that the lack transparency makes it very hard for independent monitoring, concessions maps are incomplete, data is lacking and clearly have week enforcement laws. Based on those findings, Greenpeace announced that half of fire hotspot detected between June 11-18 are in the areas that should be protected by Indonesia’s forest moratorium. Therefore, Greenpeace calls on the government to review existing concessions, increase licensing transparency, establish a credible database of low carbon land and undertake clear spatial and land use planning.

Because of the current practices by the Palm oil producers, Greenpeace also launched its campaign against the Companies that use non- sustainable palm oil in their products.  Greenpeace pressed the multinational companies to stop buying palm oil from Indonesia.

In responds to that, the Industry has an effort to bring the deforestation issue under control have some through the Roundtable on Sustainable Palm Oil (RSPO). RSPO was founded in 2001 which promotes clear ethical and ecological standard for producing palm oil.  RSPO’s member consists of multinational companies such as Unilever, Cadbury’s, Nestle, and Tesco.

However, based on the Greenpeace report that some RSPO members are still relying on palm oil supplier that destroy rainforest and convert peatlands for their plantation.

There are some strategies to build the sustainable of palm oil practices in Indonesia, a moratorium on converting forest and peat land into palm oil plantation. Also, the Government around the world must recognize the role of deforestation in climate change.